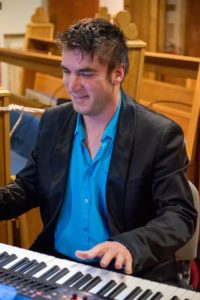 Since leaving the Welsh college of Music And Drama Richard is now a freelance Musician working in many fields of music. He was Musical Director for an 8 part T.V. series on HTV in 1998 called Talent Trial.

He has worked on Cruises for P&0, Swan Hellenic, Saga and Cunard playing for Production Shows, Pop, and Jazz Bands. In 1997–2003 he toured with a group of West End Singers to the Middle East, Far East, Dubai, and India taking Corporate Cabaret shows to top Hotels playing Piano and Keyboards.

His Keyboard work includes Beyond the Barricade Touring Show for John Warwick Associates which was followed by a Disney follow up playing first Keyboards. In 2003-4.Pontins and Butlins Summer seasons playing Keys with five piece house Band.

Touring shows include Chicago, Seven Brides for Seven Brothers, Joseph, Les Mis, and Miss Saigon; and various musical revues at theatres including Jermyn Street, Hippodrome and Redgrave in Bristol. Recently he has become Musical Director for Stage to Screen with singer Richard Beavis, a Musical Theatre show based around Hollywood musicals.

Broadcasts include Radio 3 and 2 programmes in the Radio 2 Young Musician of the Year, and a Radio 3 Broadcast with the Suches Quartet. His other freelance work includes playing the Double Bass for Orchestras including Bath Philharmonia, Bristol Concert and other freelance ensembles. As a Musical Director he has numerous shows for theatre companies under his belt, as well as arranging and writing in wide media. He’s also an organist who is equally at home with classical or cinema styles doing recitals, recordings, and playing for services.