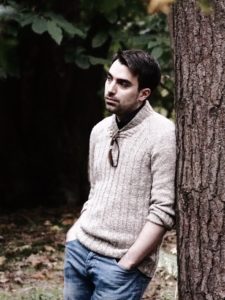 Matthew Clark is a singer, conductor and composer living in Gloucester and working in the city and surrounding area. He was born in Bedford and studied singing with Rachel Nicholls before undertaking a degree in composition at the Royal Welsh College of Music and Drama. He is a bass Lay Clerk at Gloucester Cathedral and sings regularly with a variety of choirs and as a soloist. He has sung with groups including the BBC National Chorus of Wales, the Armonico Consort, Cantemus Chamber Choir Wales and the Choirs of Llandaff Cathedral. As a soloist he has sung various solo roles with several different ensembles in the South West, the Midlands & South Wales with music including Bach’s St. John Passion, Handel’s Israel in Egypt, Charpentier’s Messe de Minuit, Vaughan-Williams’ Fantasia on Christmas Carols, Mark Bowden’s commission We have Found a Better Land as well as the requiems of Fauré, Duruflé, Howells and Brahms.

Matthew developed an interest in conducting during his school years, and was allowed to pursue this with his school and county orchestras. During his studies at he RWCMD he co-founded his own choir, Côr Cyfoes, in order to perform new music by composers at RWCMD and Cardiff University. After graduating he worked with Constanza Ladies Choir and the Serenata Singing Group before his move to Gloucester in 2016 to take up the role of bass lay clerk. He occasionally conducts the lay clerks in services at the cathedral and at the Three Choirs Festival. He is currently musical director of Hempstead Community Choir and Musica Vera Chamber Choir, Cheltenham.

Matthew has written a large amount of vocal music, both solo and choral. He has been commissioned and premiered by ensembles in London, Cardiff, Bristol. His music is sung regularly by Gloucester Cathedral Choir, for whom he written motets and most recently a setting of the Passion Story, premiered on Palm Sunday 2019.